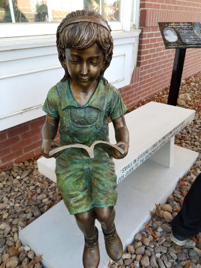 (Photo by Teresa's granddaughter Theresa Rosell Mason)
Teresa's Statue
I sometimes poo-poo that old saying: "A picture is worth a thousand words." Who knows how long that idea's been around: since 1911 claim Americans. But England calls the precept older—and theirs. As for  China? Its old saying is ten times ours: "A picture is worth TEN thousand words."
When I saw this photograph of the Teresa Martin statue in Concordia, Kansas, I doffed my hat to the Chinese. Although I hadn't seen Teresa for fifteen years and had never seen her as a child, she leaped out of her statue and wrapped herself, once more, around my heart.
Teresa must be in her element in Concordia, participating in yet another Orphan Train Reunion. She'll be surrounded by statues of orphan train riders in nearby LeDuc Memorial, Britt's Fountain and Gifts, and the Concordia American Legion. Among the statues: Father Paul Fangman. The National Orphan Train Complex, unveiled his image February 23.
Teresa, I know, would remember Father Fangman, who had celebrated Mass at her first Orphan Train Reunion in 1964. Here's what I wrote about that:
"Teresa didn't know he was an orphan, but he was. People in Raeville, an unincorporated village, took him. A skinny little man, Father Fangman didn't talk long, although he said he was born Jewish but raised Catholic. Teresa stirred. She wondered how he knew he was Jewish. The priest seemed nervous. He shook a lot and rushed through his words. Mostly he spoke about how he never tried to find his folks. Teresa wondered if he thought he should. Those who knew him seemed to love him. They called him Father Paulie." (from Mail-Order Kid by Marilyn June Coffey)
Father Paulie, indeed, laughed when he discovered he had been born Jewish. He found out when he was a lifelong Catholic and dedicated Catholic Priest. Teresa, later, would discover her Jewish heritage. This must have been frequent in New York where the best place to leave an unwanted baby was the New York Foundling Hospital, founded by Catholics.
written for:
a JoLt of CoFFeY
An Intermittent Newsletter
by Marilyn June Coffey
The author of:
A Cretan Cycle: "A single, sharp, funny story in verse" retells the Minotaur's myth
Great Plains Patchwork: A lyric tale of the "wondrous strange" great plains
JackJack & JuneBug: A steamy, poignant love story (with Jack Loscutoff)
Mail-Order Kid: A popular biography of Teresa Martin, an orphan train rider
Marcella: A controversial, internationally published coming-of-age novel
Mas - tur - ba - tion: A rollicking tract on a "quite inexhaustible" subject
Pricksongs: A libidinous collection of tart poems from the turbulent sixties
That Punk Jimmy Hoffa: A memoir depicts how Coffey's father beat Hoffa
The Battle of Orleans: A documentary about a hotly disputed Marcella reading
Thieves, Rascals & Sore Losers: Details the dirty deals that helped settle Nebraska
& publisher of Jack Loscutoff's latest books:
Aunt Gussie's Socks: A Russian-American based memoir (in fact and fiction)
A Line of Shorts: The breezy short stories and holy satires of an awesome wordsmith
Buy Coffey's & Loscutoff's books:
from www.marilyncoffey.net  or  www.jackloscutoff.com  or  http://amazon.com/
Want to get off this mailing list?
Reply and write REMOVE in the subject line.
Warm wishes,
Marilyn
Marilyn June Coffey
Posted by marilyncoffey at 4:07 PM No comments:

He weighed 325 pounds, used his girth to bump people into place in picket lines and to bounce offending taxicabs into the river.
He ate gargantuan meals, paying $15 to $30 each ($136 to $272 in 2017 dollars).
And he drove a brand-new, bright red Cadillac convertible, a gift. On the front seat lay a shotgun, cleaned, primed and ready to go. A sign on the back bumper read "Clergy" to avoid tickets.
His name was Robert B. "Barney" Baker and he was Hoffa's toughest hoodlum, a twice-convicted thug, once a prizefighter, a strong-arm man on New York docks, a bouncer.
Hoffa sent Barney to Alma to organize my father's Coffey's Transfer.
Dad and Barney argued.
"You know you need signatures from fifty-one per cent of my men," Dad said, "before you can claim to represent them legally."
"Dat don matter." Barney shrugged. "Hoffa sez weeze gonna organize yooze from the top down." The huge thug drew a line with his forefinger from his forehead to his belly as though he had filleted a trout.
from:
THAT PUNK JIMMY HOFFA!
I Watched My Dad Beat the Teamsters
A Daughter's Memoir
by Marilyn June Coffey
Publication Date: July 30
the date Hoffa "disappeared"
Posted by marilyncoffey at 7:41 PM No comments:

I opened up the BookBub Blog, curious to discover why Google had sent it to me.
The blog's headline told all: 15 Books to Read If You Love 'Orphan Train'
The number one book, of course, was by Christina Baker Kline, bestselling author of Orphan Train, now showing off her new historical fiction novel called A Piece of the World. It hits the book stores today.
And listed below were the chosen books to read if you loved Kline's Orphan Train.
Among those I recognized were Sue Monk Kidd's The Secret Life of Bees, Toni Morrison's The Bluest Eye and—what a pleasure—Marilyn June Coffey's Mail-Order Kid.
See marilyncoffey.net for details on Mail-Order Kid.
To read the entire BookBub Blog, try https://media.bookbub.com/blog/2017/02/20/books-to-read-if-you-love-orphan-train/
Posted by marilyncoffey at 9:29 AM No comments:

Come Valentine's Day, loved ones don't cross my mind. Nope.
Instead, I remember Jimmy Hoffa's 1913 birthday.
In the summer of 1912, Jimmy's parents, John and Viola Hoffa, already had two kids. So when Viola's tummy plumped up, she thought, "Woops! Pregnant again."
Just to be sure, she visited the local doctor. He examined her enlarged belly and said, "Pregnant? You're not pregnant, Mrs. Hoffa. You've got a tumor."
She believed him.
But on February 14, 1913, to Viola's surprise, little Jimmy Hoffa struggled and squalled his way out.
When she could speak, Viola declared: "Some tumor!"
The Hoffas called their baby "The Tumor" even after they christened him James Riddle Hoffa.
The Tumor's sixteen birthday turned into one of the bloodiest days in Chicago mob history, the climax of a gang war between Al Capone and "Bugs" Moran. Capone's gang, disguised as police officers, slaughtered seven of Moran's men in a garage using Thompson submachine guns.
So on February 14, I celebrate both: Jimmy Hoffa's birthday and the Saint Valentine's massacre, as it's now known.
from:
THAT PUNK JIMMY HOFFA!
I Watched My Dad Beat the Teamsters
A Daughter's Memoir
by Marilyn June Coffey
Publication Date: July 30
the date Hoffa "disappeared"
Posted by marilyncoffey at 3:01 PM No comments:

Office manager Glen Coffey let out his breath. He'd driven to Coffey's Transfer's Omaha office to find a car full of bruisers blocking his usual parking space. Another carload plugged the terminal drive. Plus a half-dozen more cars full of rowdies were parked nearby.
"Oh, God," Glen thought. "Hoffa's imported a herd of goons."
When the office manager stepped out of his car, he saw that each thug leisurely cleaned a shotgun.
"What are you doing?" Glen asked.
"It's hunting season. We're getting ready to do some shooting."
from:
THAT PUNK JIMMY HOFFA!
I Watched My Dad Beat the Teamsters
A Daughter's Memoir
by Marilyn June Coffey
Publication Date: July 30
the date Hoffa "disappeared"
Posted by marilyncoffey at 12:39 PM No comments:

The next time you're in Concordia, Kansas, you'll want to make two stops: one at National Orphan Train Complex and the other at the Frank Carlson Library.
In both cases you can meet Teresa Martin, an Orphan Train rider.
In the Complex, Teresa resides in the book store in the pages of Mail-Order Kid, which I wrote about her, and in the Complex's collection of photographs from that book.
But at the Library, Teresa comes to life in a statue that lounges outdoors near the Library's bay window. I know she's comfortable in her new home for she trained and worked as a librarian during her adult life. By the time you reach Concordia, the figure should be well-lit and you'll be able to walk down a path to the statue.
With the help of the Complex, four Orphan Train riders, including Teresa, have been memorialized as statues from the Randolph Rose Collection in Yonkers, N.Y. and placed in Concordia. Besides the Library, statues can be seen at LeDuc Memorial, Britt's Fountain and Gifts, and the Concordia American Legion.
For more information on these statues, contact
Shaley George, curator, orphantraindepot@gmail.com
National Orphan Train Complex
http://orphantraindepot.org/
Posted by marilyncoffey at 9:56 AM No comments:

Sixty-seven years ago, an insignificant US senator informed a West Virginian women's club that the State Department was "infested" with communists. Whoosh, his name — Joe McCarthy — streaked like a meteor.
To help Joe unearth communists for his oodles of "witch hunts," he hired a slender young guy with thick tousled hair, a family friend named Robert "Bobby" Kennedy.
Bobby proved an excellent student. Soon he used the ferreting skills he learned from Joe to hunt down that "Little Guy," Teamster Jimmy Hoffa.
from:
THAT PUNK JIMMY HOFFA!
I Watched My Dad Beat the Teamsters
A Daughter's Memoir
by Marilyn June Coffey
Publication Date: July 30
the date Hoffa "disappeared"
Posted by marilyncoffey at 9:55 AM No comments: